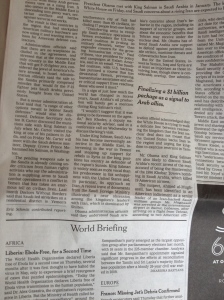 I like reading newspapers. Always have. I hate the black smudged fingers, hate the awkwardness of folding the damn things and am not particularly partial to the smell of printer’s ink. But there’s something to be said for the leisurely manipulating with arms and fingers of a veritable blanket of news. In these days of single tap iPhones, reading a paper almost registers as exercise. It’s a kind of kinetic fun reading a beach towel of newsprint, where every square inch is covered in information. It ripples and folds and is big enough to catch the wind in its pleats.

Now here’s the odd part. We read it for relaxation, don’t we? I do. I have a hard time reading it in the morning, because there is so much to accomplish that day. I only have room for that. But as the afternoon turns to evening, I yearn to de-stress. I can’t think about another email or phone call or meeting.  I just want to sit, relax and read the paper.

Why should reading about other people’s (states’, nations’, governments’, presidents’, politicians’) problems be relaxing? My rational mind can think of nothing worse.  And one story in ten is downright awful (10 in 10 if you read the Post).

Let’s take a story about Al Qaeda as an example. Some cell of Al Qaeda bombed a marketplace. Okay. This is not good. I shop in marketplaces. Maybe I’d better stop doing that, particularly if I move to Sudan. (Your negativity.)  People die the world over, but these twelve people died doing something so human — bargaining for lentils (negativity of the situation).  Al Qaeda is a bunch of radical extremists who kill people with suicide bombs, warp young people to think that redemption is wearing a suicide bomb and detonating it in a public place is the only way to have friends when you get to heaven, and besides should really have a ‘u’ in their name, shouldn’t they? (Negativity of the writer.) When these three things come together you have a perfect storm of suffering negativity, and all you did was read the paper and “relax”. Hmm. Maybe I should take up ping pong.

So why do I do it? Why do I seemingly relax and enjoy reading about pain, sorrow, death and destruction? I don’t know. But here are some possibilities.

1) It’s comforting to watch/read about people taking action — positive or negative. Especially when you aren’t (at that moment). It’s a great substitute for the feeling of actually accomplishing something and all you’ve done is read a story.

2) It’s just a bedtime story. Story is one of the oldest forms of entertainment, escapism, do we really take them that seriously, whether you identify with the protagonist or not? (Do you go out and sleep with your mother after reading Oedipus?)

3) The other sections. Though you can grit your teeth while reading the front page news of the world, reading about Sports (unless you’re a Cubs fan) Arts, Business, Home, Style (as long as there are photos of models) is pleasurable.

This leads me to another conundrum. Why is reading a bad review of a play or movie pleasurable? Is it because we love to laugh at fools? Even those brave fools who actually try to achieve something difficult and great? Or alternately, do we like to hate critics?

Both of these activities give us great feelings of superiority — again, while all we have actually done is read a story. In fact, now that I think of it, doesn’t that apply to all the news stories as well? “I could do better than those idiots in Washington DC.” “Does Rupert Murdoch have any idea what he’s doing divorcing wife #3 after wife #2 cost him a cool billion?” “Should police really be given guns when polls show that triggers trigger violence and all violence really is is unhappy people having a bad day.” It allows for smug superiority of the most covert kind. Not pretty. This is what I do to relax? Serve as judge, jury and executioner while reading entertaining stories.

I’ve been in the paper before. And at its worst I felt a little bit proud. I got my name in the paper. I must be someone of importance. It’s like a mirror that only sees one way.

So that’s it! Everything, whether you’re in the paper or reading it, makes you superior. What a great trick. Of course you’d want to keep reading the paper wouldn’t you?

But here’s the rub. When I actually read a newspaper everyday, I feel cheap. I feel like a whore. You think I have time to solve the Syrian Civil War? Why are they making me read about radiation escaping from Nuclear plants in Japan? I’m so paranoid about disease, war, terrorism, the political logjam, and our democracy already, why are they adding to my burden? Why? Do they want me to have a panic attack right here, right now?

I don’t think I’m going to read the paper any more. At least not until I get off work. Did you hear that Donald Trump wants to use caged leopards in designer gowns as presiding physicians in clinics for four year olds? What an idiot.