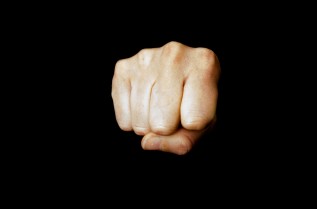 1. Consider the source. Bullies are cowards with loud voices. They believe that the force of their personalities/ego can flatten all comers. This is more than a belief. It’s a kind of faith. As such, reasoning with a bully is not possible. Reason is not their forte. Power is.

So the first thing to do in dealing with a bully is to fart. That’s right. Create a noxious atmosphere of another kind and see how long they last. Tell them that smell is as noxious as they are. When they start with the sarcasm — “Whatsa matter Mr. Farty!” — start reciting the Declaration of Independence. This is a confusion tactic because it is a  document about the freedom of all people from tyranny. They may not get the joke, but it will be hard for them to get a word in edgewise, particularly if you are alternating with verses in high soprano of the “Star Spangled Banner.”

Now, ask them do they love their country? Are they true Americans? Asking them questions while looking directly into their eyes is something that few people actually have the balls to do, because people are afraid of bullies. But it is surprising how often a direct question will stop a bully in their tracks.

2. The reason you are being bullied is that the bully thinks you are weak. When approached by your next bully, drop to the floor and do twenty push-ups, that’ll show em! Tell them you wear a black belt to yoga class and they shouldn’t mess with you. No matter what kind of booming voice they may have, say “I can’t hear you , speak up!” and when they speak again, say, “Is that a mosquito talking? I can’t actually make out the words.” Hide your skateboard in the bushes and tell them if they don’t shut up you’re going to run over them in your Mercedes GLE SUV. Tell them that stands for Good Little Efforts Sometimes Undercut Violence.

Show them you’re not afraid.  When they ask, are you a pussy?  Don’t look them in the eye and meow. Sing your best version of “I Shot the Sheriff”  and move on before they can respond.

The biggest skill a bully has is generating fear in his audience. And human nature is such that once they’ve planted the seed of fear, unless you have the spiritual/emotional tools to deal with it, it will grow and become a monster with acne and size 14 feet. The worst chapters in human history aren’t caused by bullies. They are the results of cowardly human reactions to bullies. Bullies can’t do it alone.

3. The key is to take action, even if it’s just to show them your pet rock. Make them sign a consent form. Ask them for their bullying license. Did they pass the bullying test? That’ll scare them. Tell them NY State standards are such that you have to have screwed 100 people out of their life savings to become a Class A Bully, and do they own any property that has been repossessed from poor Americans. Absent that, unless they have been indicted by a Grand Jury or gone to prison for bribery, they are no real bully.

Remember bullying equals fear. So the best question you can ask a bully is, what are you frightened of? Then ask yourself.

1 thought on “Dealing with Bullies”