We’re Americans. We’re not down-to-earth any more, earth is dirty. Earth is for earthworms. Earth is for farmers who are so grounded they need suspenders to hold their pants up. Earth is for pussies and other lowly animals.  We’re better than that. We’re flying high on drugs and lies and video games. Or should be. The first day of my administration, I will start the process to repeal the Law of Gravity.

We were made in the image of God and you don’t see Him walking around, sitting on curbstones, vaping and spitting. No. He’s up in the clouds. He flying around — weightless and bodyless. Even His wisdom can’t weigh him down. That’s the way it should be for all Americans.

Peter Pan did it, Rudolph did it, we should ALL be able to do it. I say all gravity should be taken out of the Constitution entirely and given to Mexicans.

And to you scientists who claim that the law of gravity is not something a President can mess with. I say, open your minds. You’re scientists! We can build the greatest weightless machine known to man that would allow Americans to make money while floating.

America is about making your dreams a reality. Repealing the Law of Gravity is the best way to make America great again.

Candidate Two: I believe that all gun owners should be tested on their ability to do advanced calculus. If the trajectory of a bullet is such that it pierces another human’s skin, then the direction of your life is radically changed forever. No way around it. That’s calculus. But if you don’t know calculus then you’re going to think you can just kill ’em.

Candidate One: All dicks should be displayed. This law is so obvious, it’s a wonder it has never been introduced before. No more faux dick-raising contests. If you’re going to raise a ruckus and you can’t get it up, what kind of credibility does that give you? You’re all talk and no action. You’re barking up the wrong flag pole. Imagine what this will do to gun laws. Is anyone going to take your Uzi seriously when you have to display your real gun simultaneously? True dick-raising contests are about power, not sex. Anything sexually seductive will be thrown out in a court of law, because male prerogative is such, that if you can’t be seduced by power, what good are you?

Candidate One: Women must wear gingham. Would you have it any other way? Whether it is the workplace, the white house, or a Pancake Breakfast Fundraiser. This way they are less dangerous and more like your grandmother. Strippers and super models are, of course, exempt.

Candidate Two: There are less people who eat at Denny’s than there were in 2012. Pancake consumption has plummeted and this is nowhere more apparent than in the maple syrup states. As a result, my vow is to have compassion for others, because there are no others, just mirrors of your own humanity, and as such, they might be ME some day, and I like pancakes.

Candidate One – Final Statement: Mexicans, Muslims, Makeovers, Melania, Maseratis, money for you, money for me.

Candidate Two – Final Statement: I gladly accepted my party’s nomination and hope that it doesn’t go past my bedtime, because the key to my platform is sleep. And sleep begets clear-headedness, which of course begets faith. A famous man once said, the clearer you are in the head, the more you’ll understand your own heart, which is my heart, which is Gloria Steinem’s heart, which was Walt Whitman’s heart, and Mother Teresa’s heart and every hermit and every politician’s heart and don’t forget the people who cook your burgers at Wendy’s, and that’s the heart of the matter — the matter being 10 billion people. As Jerry Ross once said, “You gotta have heart.” 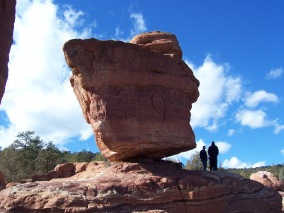 Beautiful photo? Or OMG run for your lives!

I live with negativity. My hunch is that you do too. It’s part of the human condition.

Now here’s the surprise. All that negativity?

It comes from me.

When my boss calls my work scattered, it is my response to his comment that creates the bad feeling in me, not the comment itself. Is he right? Am I going to get fired? Do you think he’s been talking to the baker I worked for when I was 16 who yelled at me for not keeping my mind on my work and dropping a tray of custard creams?

I label it negativity. I judge him as negative. I become depressed because his comment on my work pushes my buttons. I blame him for my paranoia about losing my job and leaving my family homeless. But, in reality, all those buttons are MINE.

My wife says, why don’t you EVER take out the trash. If she hadn’t said the word ‘EVER’ we’d be fine.

Is she actually saying I’ve never taken the trash out in our nearly 20 years of marriage? She exaggerates. She’s making a point. I get that. And if she has her way it will have its intended effect. I will get angry, yell something mean back at her, take the trash bag out and throw it against the refrigerator. Then I’ll feel bad, pick it up, wipe the smelly stains off the floor and take it out. See? That was my fault.

When I verbally attack the owner of a local bar for serving underaged drinkers and staying open ’til 4am so the police have to patrol and stop the fights of the drunks at all hours which is giving the town a bad name, he tells me politely but firmly that the town changed the parking rules to feed the meters until 11pm so no one goes to his bar anymore and he’s had to hire a chef to actually sell real food and change the dynamic of his establishment. I am left with this creepy feeling that my negativity got the best of me; that if I had just asked him how’s business, he would have told me the same thing without me throwing verbal punches.

Why do I need it so badly? What does all this negativity give me? Evidently I need to be right. The side of good is always my side, right? Whether I’ve thought two seconds about what I’m saying or not.

It’s surprising because when I look into the mirror in the morning, I’m pretty happy with my self, but sometimes when I look in other people’s eyes, and see the fear and trepidation and knee-jerk yesses on their lips, I’m a monster. Which is the real me?

That’s why I figured I needed a better mirror. One that shows that negativity so I can face it BEFORE I go out into the world.

That’s what my Buddhist practice does for me. The absolute worst thing looks better and becomes much more well-considered from my side of the mirror when I have chanted in the morning. I have no idea how it works. I know how it doesn’t work though. It doesn’t work on a level of intellect, knowledge or consciousness that my rational brain can predict or understand. It pushes me out of the brain roads I tend to travel. I just know that if I don’t face myself each day this way, all the negative stars come out shooting. This practice is like the sun. When I do it daily, the sun comes out and the shooting stars disappear. When I don’t…watch out for me.

If you need a hedge against your own negativity as I do, make a practice of taking a faith action strong enough to remind you that the thing that’s really bugging you…is you.