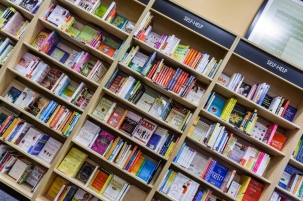 Chasing Your Tail to Success

Take Hold of Your Life! — But Be Home for Dinner

Slacker Tracker– Are You One? Nahhh

Who Me? Dealing with Low Self Worth

Wear a Mask— A Garbage Collector’s Book of Wisdom

Does Your Wiki Leak?—Identity Theft for Seniors

Beautiful Cow, Beautiful You – Milking Your Way to Beauty

Your Best You and His Best Him — Creating Your Best They 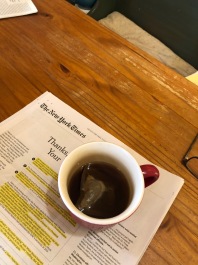 It was a deal too good to pass up. Sure, I buy a newspaper, now and then, mostly TheNew York Times. Sure, I also click through to stories that people have sent me online and scroll through. And oops, I just reached my limit of ten free articles per month. But until last Tuesday, no one had offered me a deal like this. After my ten free articles, I was offered, as a New Yorker who reads The New York Times, the deal that if I wanted to pay a dollar a week, I would get complete access to The Times’stories on my technical devices. $4 a month. A little difficult to pass up.

So, I went for it. And soon I was scrolling through lots of stories on my phone, as freewheeling as a teenager in a hot-rod on the open road. In fact, too freewheeling. Something was the matter. It was still the news. It was still The Times. But it didn’t seem to have as much weight, not as much gravitas. I could scroll through disasters and political crises with the tip of my thumb. Stop and read, scroll and view. Free-wheeling.

But here’s the problem. That’s also the way I FELT about the news after reading it in this little thing in my palm. Thirty-three deaths due to arson, scroll on. Various entities making a laughingstock of our democracy, can’t touch me! The planet going to pot, hee hee!!! Watch me pop a wheelie!

It was a little like reading a comic book. Paragraph of content, graphic photo ad about matching men’s and women’s underwear, paragraph of content, graphic photo ad about Broadway play about hell. I’m all for not being traumatized by the daily diet of bad news, but this was something else. I wasn’t really getting any news. I was the Teflon reader, a glass between me and it.

So, I decided to invest in an old-fashioned newspaper again. $3. Not cheap. A big old broadsheet New York Times. Same stories. Different wrapper. When I opened it with two hands and two arms, my chest expanded. There was a physical world laid out before me that I could choose to read or not; allow my eyes to skip about and land, then dig in. My fingers got inky, the newspaper wouldn’t fold the way I wanted it, but somehow, reading the same story in newsprint that I had read on my iPhone, had way more impact and meaning.

In addition, I didn’t have to think, “Gee I wonder if there’s a good article in the Science section I should check out.”  No. I couldn’t avoid the Science section. It fell out on my lap and welcomed me in inky delight with a large photo of a duckbilled platypus as big as my head. The platypus was asking me, begging me really, to read about his plight. Why wouldn’t I want to read about a duckbilled platypus? But I never would have reached this article in my phone. I wouldn’t have a platypus in my lap that I had to decide what to do with. I would have had to search out Science or KNOW that today there is an article on duckbilled platypi. And probably, in my haste to read the latest comic on impeachment, would have forgotten that science, let alone duckbilled platypi existed. This is called work. I don’t want to do work when I read the news, I want to be in a contemplative mode and consider the world–all of it–and take it in as it surrounds me. I want to wave my arms attached to newsprint back and forth in front of me and fold and open like some dancer of life.

When I had finished with the newspaper, there was that split second moment of should I keep this or should I dispose of it – the corpus of news, the body. No matter what my decision was, it was a decision: that second of conscience that rears its head. And then I kept it or threw it away. But the news itself had entered my motor skills (beyond the thumb) and again, made an impression. No such impression or decision was ever made with the tip of my thumb and my coquettish eye.

Is it just me? Am I a dinosaur? I will check my phone, glance at my phone, read a quick update on my phone, be protective of my phone, be disgusted that I need my phone, but seriously read, properly digest and contemplate a worthy article on my phone? No. My life is larger and more sublimely complicated than any three square inches of plastic.