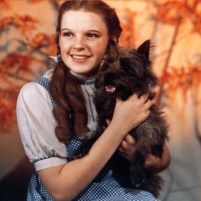 L. Frank Baum, the author of the Oz books, dabbled in Theosophy, a religion invented as a kind of bridge between what the world was starting to discover about Eastern religions like Buddhism, and the Christianity that was the prevalent religion of America at the time – the late 1800’s. This is a bridge that Ralph Waldo Emerson and others earlier in the century had started to build between Eastern and Western religions with Transcendentalism. In fact, in 1844 the first English translation of the Buddha’s highest teaching, The Lotus Sutra, was included in The Dial, a publication of the New England Transcendentalists.

One of the enduring delights of L. Frank Baum’s story, The Wizard of Oz, is the reversals that the plot consistently turns on. If you squint hard enough, you can almost see the faint outlines of Buddhist philosophy. Dorothy’s Kansas home is unmoored by a tornado landing in a strange place, Oz. When Dorothy lands, Glenda the good witch, a positive force of the universe, appears and points out that her house fell on and killed an evil force in the universe, the wicked witch of the east. (“When great evil occurs, great good follows.1”)

Glenda bestows Dorothy with the witch’s magical ruby slippers. To get the answers she thinks she needs to get home, Dorothy is told of an expedient means, the wizard of Oz, who is all knowing and will be able to tell her the answers.

What are expedient means? Webster says an expedient is something fit and suitable for the purpose. In Buddhism, an expedient means is simply a method skillfully devised and employed by Buddhas and bodhisattvas to lead people to their enlightenment.

Dorothy starts her journey down the yellow brick road to seek the wizard and on the way, she finds other creatures who complain that they don’t have the answers to solve their karmic problems—a lion without courage, a tin man without a heart, a scarecrow without a brain. Together they decide that the wizard must have the answers and journey to see him.

When they arrive and are faced with the wizard, he is larger, scarier and more Godlike than anything they can imagine. The wizard tells them he will help them when they have proven themselves by bringing him the wicked witch’s broomstick. They take on this quest, and survive the dangers of the witch’s magic and her minions of flying monkeys and guards, vanquishing the wicked witch in the process.

But when they return to the wizard with their prize, he seems just as scary and frightening (and ultimately useless to give them the answers they seek) as before. Until the only being in their group who is not cowed by this wizard, Toto, Dorothy’s little dog, discovers a man behind a curtain and once he is discovered to BE the wizard everything calms down.

Unmasked, the wizard, a little man from Kansas, feels he owes them something, so he gives them each something that bestows the things they say they want on them, proving to the audience that they had the thing they sought inside themselves all along, they just didn’t acknowledge it. He awards the scarecrow a diploma, the lion a medal and the tin man a testimonial and states that where he comes from these things are given to men who have no more brains, courage or heart than they have.

The wizard has a hot air balloon which he has been saving to get himself and now Dorothy back to Kansas, but Toto jumps out at the last minute and Dorothy is left in Oz without a way home.  Glenda comforts Dorothy and reveals that Dorothy has always had the power to return home but that she had to learn it for herself. Dorothy says that she has learned never to go further than her own backyard to look for her heart’s desire.  She had the answer with her all along. (“Never seek enlightenment outside of yourself.”2) She clicks the heels of her ruby slippers and says there’s no place like home and she is home.

Dorothy could have gone home from Oz any time she wanted, all she had to do was click her heels. But instead she needed an expedient means to become aware of the wisdom she already possessed.

The original Buddha taught his followers about expedient means by teaching this parable from the Lotus Sutra. A father’s children are sick and beg their father to cure them. He offers them medicine, but because the poison of sickness has entered their minds, they will not take it. “It’s no good,” they say. So he tells them, “I am old and the time of my death is near. I’m going on a trip, but I’ll leave you the medicine, just in case you change your mind.” He leaves, then sends a messenger to tell them he has died. The children, hearing this, grieve and feel like orphans. “If only our father were here, he would tell us to take this medicine. We should have listened to him.” They take the medicine and are healed. The father, hearing they are cured, returns home and greets them. His “death” was an expedient means–a  method skillfully devised to lead people to their enlightenment.

Our egos and arrogance consistently stop us from seeing what is good for us. Without an expedient means, we don’t seem able to accept the wisdom we need to be healthy and happy. The children thought they needed their father’s wisdom to take the medicine. Dorothy and friends thought they needed the wizard to provide the answers. They thought their enlightenment was outside of themselves but it was inside all the time.

Never seek enlightenment outside of yourself. Trust yourself that you have the answers. Don’t blame or point at others for the answers, look into your own soul. At the crucial moment don’t forget the promises you have made. Obstacles that you come upon are expedient means and show that you are doing it right, not a sign that you are in the wrong. Never give up, even if you want to and the flying monkeys are on your tail. The best and most satisfying victories come from the most difficult journeys down the yellow brick road.

“The journey from Kamakura to Kyoto takes 12 days. If you travel for eleven but stop with only one day remaining, how can you admire the moon over the capital. “ Pg. 1027 Writings of Nichiren Daishonin