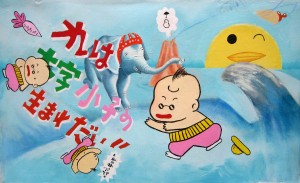 “Baby with the Bathwater” by Gina Freschet. More info about Gina’s art at freschet.com

I thank God for Global Warming. Without Global Warming, where would we be? We’d still be looking behind potted plants for Communists, or recording everyone’s cell phone conversations to make sure they’re not allied with ISIS. (“But I’ve owned this movie theater for fifty years! We show vintage movies, honest! It’s always been called The Isis!”)

It’s always around, like a friend, communicating to us all the time through the backs of our minds. Guiding our hand as we rethink throwing old pool Chlorine down the toilet. Then something big happens like a hurricane or the Giants win the World Series and it dances to the front page and we don’t have to think about racism or religious wars any more. It’s so big that even the free market and the dollar are affected.  It’s even bigger than corporations (and you thought nothing was bigger than that!).  You can run, but you cannot hide.

As far as each individual is concerned, we turn the heat down two degrees (well maybe one) and bring our batteries to the recycling dump. But really isn’t the world just too big for anyone to make a difference against the onslaught of us?

Global Warming is cause and effect.  Who do you think made the cause in the first place? It wasn’t Barney the Dinosaur. It wasn’t Fred Flintstone, it wasn’t Betsy Ross or George Washington for that matter.  It was my right foot. (On the gas pedal.) It was my index finger. (On the thermostat.)

It is a little known fact that George Washington is the Father of Global Warming (if his initials aren’t enough to convince you, don’t forget that incident with the cherry tree), George W. Bush is the Son, and We are the Holy Ghost.

Is it my fault? No! Google should use less coal in its search engine. It’s just that Global Warming used to be six degrees of separation between the cause I made and the effect ( I didn’t know that burning old tires made smoke, who would have guessed? It was sure fun to watch them melt though). Now it’s three degrees of separation and diminishing fast. (The latest model cars have actually been developed with a Siri voice that says “Ouch” when you push the gas pedal. That’s what I’m talking about.)

Let’s face it, we need more common enemies and Global Warming fits the bill perfectly. And, believe it or not, Global Warming comes from the same place that the trash island as big as the state of Texas in the middle of the Pacific comes from; even ISIS has roots in it–our arrogance. We are a proud country, we are a country that has brought the idea of individual freedom to a pinnacle, we are a country that is so intelligently modern that we have gone soft. (Pass the Doritos please, my thumb is on the Wii trigger, and can you put them in my mouth while I play?)

But I’m not here to cast aspersions. This is really all about me. They go to the trouble of making those fluorescent twisty bulbs to save the world, so why do I throw them in the garbage when I know that somewhere in the back of my news-reading mind they should be disposed of in some other way. And why, when I read the packaging that it comes in, is there no mention of how to dispose of them, but when I read the headlines in my newspaper they say they are filled with Mercury. Why do I drive to the drug store when it is 6 blocks away? For that matter, why do I drive to my yoga class one mile away, spewing carbon into the atmosphere just so I can stay healthy? Who programmed me to stand at the refrigerator trying to think of what to eat, while this intelligent machine loses as little of its refrigeration to the atmosphere as possible, which is still too much. And why, when it no longer serves me, do I put the fridge on the curb without taking the Chlorofluorocarbons (CFCs) from it. Does anyone know how to do that? Why are we taught the math that is the foundation of our planet without being taught about our planet?

Oh well, wait a year or two. Global Warming will take care of it. It will take that smile off my face, when it attacks like Godzilla and destroys homes, gyms and the food supply. And then we will start the retraining. Then our children will learn new lessons. And they won’t be grammar lessons or how to edit video to put your film on youtube. They’ll be the lessons that the Native Americans taught their young when the land was sacred and the teepee was the only housing stock on its face; when the rivers ran pure because they belonged to all of us, not just General Electric. We’ll live simpler and smarter because Global Warming will have us by the short hairs. And we’ll rediscover our happiness and our sense of appreciation and the joy that comes from contemplating soil. We’ll spend the next century reverse engineering our planet so that cows give milk, caterpillars turn to butterflies, and there’s still a little time left over to play Grand Theft Auto.

So let’s get started. Put your hands together for Global Warming. It’s Nature’s way of saying, “Stop already.”  And frankly, It’s the best thing that ever happened to us